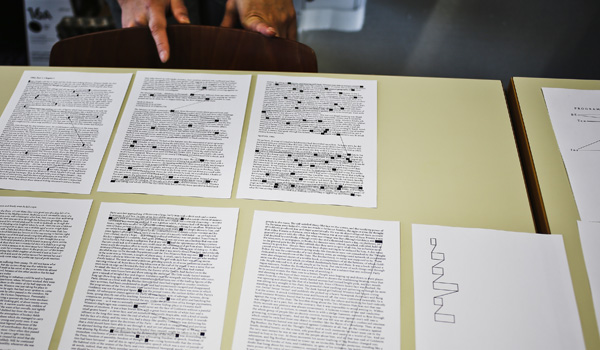 A project of the Interaction Seminar

It is one of our main goals to expand the methodologies of design and to educate our students in developing a set of individual, unique styles and aesthetics.
While Adobe InDesign on the one hand is offering a valuable set of pre-defined, common solutions for layout and design problems, a programming language on the other hand allows for questioning the set of available methods and for extending it by creating new tools.
The Adobe Creative Suite features a full set of application level scripting possibilities for many years now. We wanted to incorporate these facilities in our teaching curriculum and offered a workshop, generative design in InDesign, with the help of Benedikt Groß to our students in Spring 2012. While preparing the workshop Benedikt warned that the existing JavaScript implementation in InDesign is difficult to use and that it should be simplified to address designers. He suggested to wrap it into a Processing like library.
We all agreed that this would be a great addition to our generative design classes and started to work on basil.js. We aimed to create a library that brings scripting and automation into layout and makes computational and generative design possible from within InDesign. Additionally it also includes workflow improvements for data imports from various sources, indexing and complex document management.

After nine months of development basil.js was released free as in speech under the MIT License on February 28th 2013 and we are looking forward to seeing more designers using and adding to this project.